Skip to Content
Home SPORTS Everything you need to know about Man United’s new signing, Antony

Maxxcash Leave a Comment on Everything you need to know about Man United’s new signing, Antony

Manchester United have agreed a €95 million transfer fee, plus €5m in add-ons, to sign Ajax winger Antony. He will be the second-most expensive player in the club’s history (behind the €105m they spent to re-sign Paul Pogba from Juventus in 2016), but is he the player to save the club?

Antony, 22, has impressed at Ajax since arriving from Sao Paulo in February 2020 for around €20m. He came through the youth ranks at Sao Paulo and made his senior debut for the Brazil national side in October 2021, in a World Cup qualifier against Venezuela, having previously starred for the under-23 squad when they won a gold medal at the 2020 Olympics.

The winger has been highly rated for some time and has been watched by both Liverpool and Bayern Munich in recent months. However, having worked under new United boss Erik ten Hag at Ajax, the Premier League club swooped to land him first. “Antony is a showman,” former Ajax and PSV forward Kenneth Perez told ESPN NL. “He showed in the Champions League that he can be decisive. He hasn’t had a chance in the Premier League yet, but it is striking how many former Eredivisie players get sidelined abroad. What Ten Hag is doing — signing many Dutch players — is very dangerous. I would, as a top club abroad, never take a player from the Eredivisie.”

So is it a gamble, or a smart move? What can United expect from their new signing?

A left-footed right winger, Antony likes to cut inside onto his stronger foot from the flank. He is able to use his incredible acceleration to get past an opponent but will often have to check back inside if he is shown the outside space as he is very reliant on his left foot.

Antony had some impressive stats among his Ajax peers last season, playing 23 of the club’s 34 league games on the way to winning the league. While he did not play as many games due to an ankle injury, he was still one of the club’s top offensive leaders.

Full of flair and guile, Antony is a great dribbler and has excellent close control. He is strongest with the ball at his feet and, in last season’s Champions League, only Paris Saint-Germain‘s Lionel Messi (26.7) and Bayern Munich‘s Kingsley Coman (24.1) recorded a higher number of carries — dribbles of at least five metres that do not necessarily involve getting past an opponent — than the Brazilian (18.6).

Antony creates a lot of danger in the final third and, of all the Ajax players, he covered the longest distance (266 metres) at a speed of over 25 kmph. His speed and acceleration helped his team on the counter attack and he was sorely missed when he was injured towards the end of last season. His balance and body position allow him to beat opponents, seemingly at ease, while he is also a very capable crosser of the ball. — ESPN NL 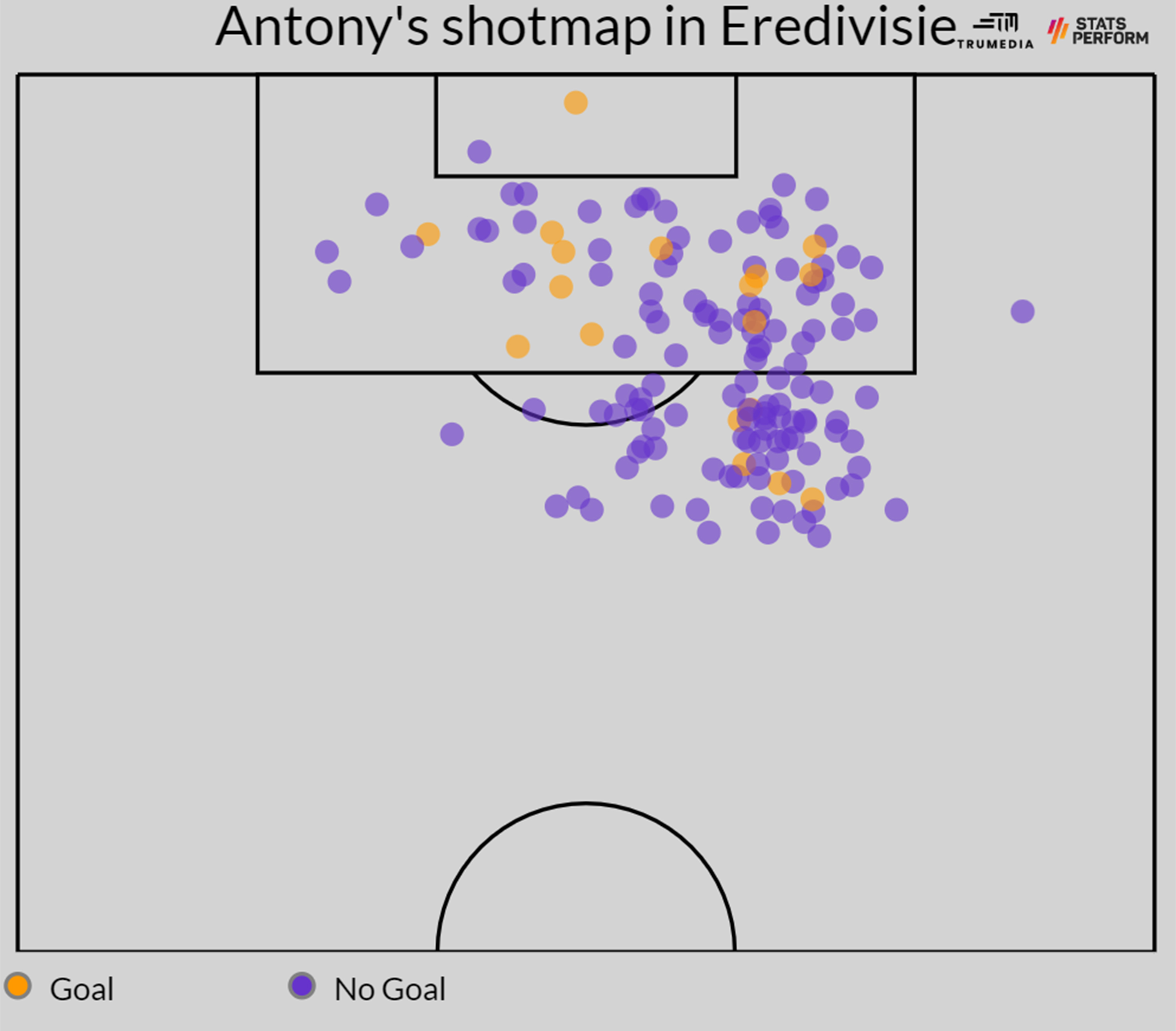 Despite only playing in 23 games, Antony showed a propensity to shoot a lot. His 79 efforts rank second in the Ajax team last season, with other players managing at least eight more games than him, while his 34.2% accuracy on target (27 shots) ranks 12th.

He also put in as many ball recoveries (101) as he did crosses, so he commits to his defensive duties too. 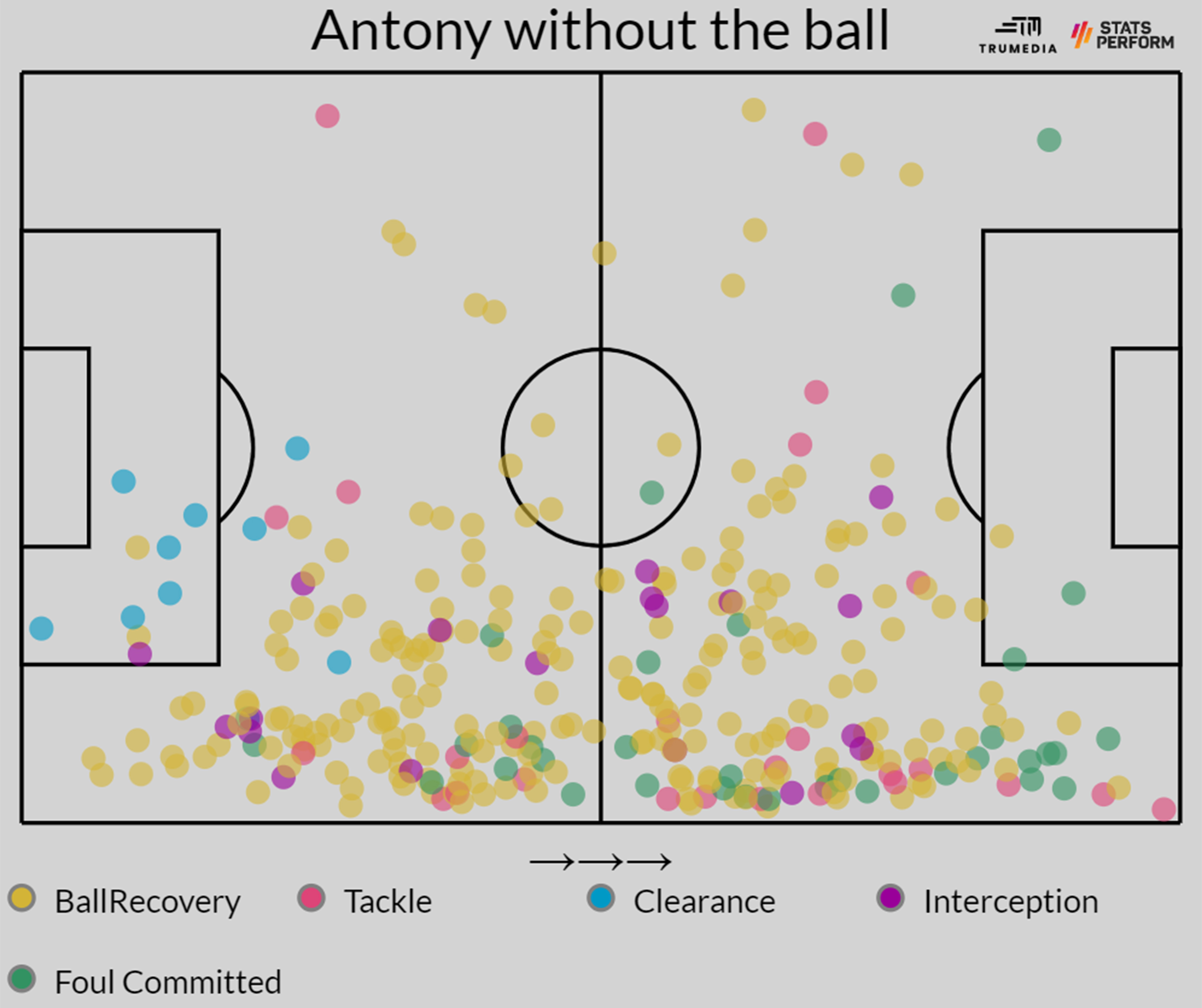 How he can improve

Antony can be a little wasteful with his shots and his decision making needs to get better. He seems unflappable, but it remains to be seen how he performs when faced with the expectation of such a huge move. Former Ajax and PSV star Marciano Vink told ESPN NL: “He needs to adapt to the high level of the Premier League, but he is used to fighting for his chances in the favelas [where he grew up in Brazil] and flew to the other side of the world at a young age. I think left-backs [in the Premier League] will play physically and won’t accept his sometimes unnecessarily skills, but after a few games he will find a way to play his own game. He is capable of adapting to the Premier League and can show why he is worth that kind of money.” — ESPN NL

Ten Hag has been keen to sign a versatile forward and Antony fits the profile of the type of player he’s been looking for. The United manager has made no secret of the fact he wanted more depth in the forward positions and Anthony Martial suffering two separate injuries already this season has only strengthened his belief.

Ten Hag has been central to the club’s recruitment policy during the summer and, like defender Lisandro Martinez, Antony is another player he worked with at Ajax. The Brazilian is only 22 and the size of the fee reflects the fact Ten Hag, in particular, believes he has the potential to become one of the most devastating wingers in the world. Sources have told ESPN that when United were initially quoted €80m earlier in the window, club chiefs thought it was too much, but Ten Hag pushed to re-start negotiations and finally got his man. — Rob Dawson

Will he fit in at Old Trafford?

Antony was usually played off the right for Ajax, allowing him to cut in on his stronger left foot, which is likely to mean he will be competing with Marcus Rashford, Jadon Sancho and Anthony Elanga for a place in the team. Ten Hag will stress that there are enough games this season to keep them all happy, but €95m is a lot to spend on a player you plan to rotate in and out.

Rashford appears most vulnerable because of his poor form. The England international scored a good goal against Liverpool but he struggled again at Southampton on Saturday and it wouldn’t be a surprise to see Antony and Sancho start on the wings once Ten Hag has a chance to pick his strongest XI. Rashford has an advantage in that he can also play as a central striker, but there is competition there too with Martial and Cristiano Ronaldo, provided the 37-year-old superstar is still a United player at the end of the transfer window. — Dawson